What’s On at Darlo This Spring

Some of the busiest social months are coming up, and we just wanted to give you a heads up on our next few events so you do not miss out.

But first of all …

The third posture of the series is eagle pose. It is an amazing posture for your joints, pelvis, vascular and reproductive systems and overall flexibility. It is the preparation for the next three balancing postures which require a tremendous amount of strength and concentration. If you look after your eagle pose it will look after you.

You can see here an example of the way it should be done and often what we see as teachers in the hot room.

Cross your arms at your elbows & twist your arms like ropes. Create pressure between the top elbow and the bottom elbow by pressing downwards. Sit your hips down and keep them there. Lift your leg over your thigh muscle and point your foot towards the back of the opposite calf muscle. You may not get it fully twisted if you have tight hips or large quads muscles, but that’s ok just point it in the direction you want it to go. Keep your stomach sucked in and you will remain balanced. This is not a posture to muscle into, but to be patient in. The movement needs to come from the hips, not the knee joint.

ZEB HOMISON IS COMING TO TOWN IN NOVEMBER

Zeb is what I like to call a “champion of champions”. He has competed in the International yoga championships on many occasions but always found himself as runner up. When USA yoga decided to do a champion of champions competition, which involved all of the past International winners, Zeb was the final winner. He has trained extensively with Mary Jarvis and is really up there with the best in terms of knowing the technique of the Bikram Yoga practice. I highly recommend you join us for one of his sessions.

He will be doing the advanced sequence on Friday November 16th at 12pm. This is open to anyone who has been consistently practicing for six months and who is keen to explore where the 26 & 2 sequence originally came from. Zeb will also be running an extended class on Sunday 18th November where he will give you tools on how to improve your beginner’s practice. This will be our last posture focused event until next year.

BOOK IN AT THE FRONT DESK! HE IS AMAZING! 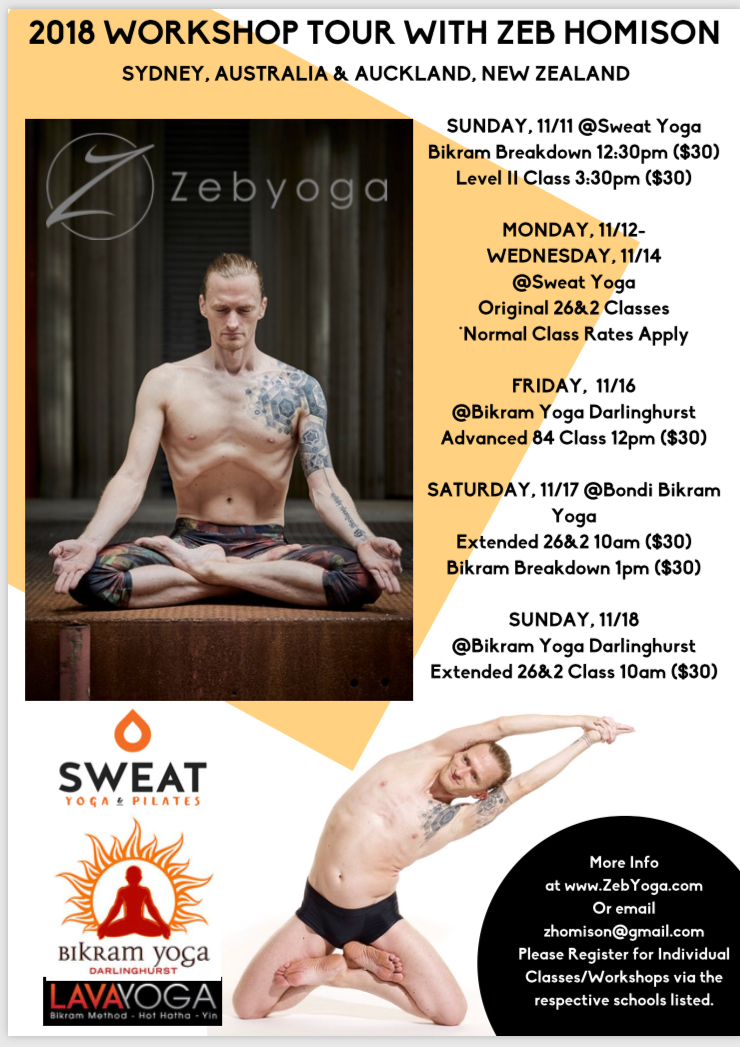 KEEPING UP YOUR YOGA PRACTICE AS IT WARMS UP

We have seen you all work so hard over these last winter months, the warmer weather brings with it easier yoga postures. You are less stiff and sore and move more efficiently into the postures, this is the time to see the work you have put in. Before you get onto the rose, get your class in first, you will spend less time hungover as well. You will also acclimate to the heat outside much better when you consistently practice throughout the warmer months. The team and I look forward to having you in class as things warm up!

Please observe the following schedule changes for this weekend!

DATES TO PUT INTO YOUR DIARY

It is still early yet but we want to make sure you are at our Christmas party.  It will be set for Saturday 15th December 2018 with a start of 6.30pm. Put the date in your diary as Marty and I would love to show our appreciation of your patronage to the school. We will do a traditional Puja blessing and will have some food and drinks to celebrate the wonderful community that we have here. We hope you can join us, everyone is welcome. The reduced schedule will start on this day so please note that the 5.30pm class will be cancelled.

As always the Darlo team thanks you for being a part of our community. See you in the hot room!!